No Murderers As Teachers

“We were in a room in the library interviewing Steele and I’m looking around I see blood everywhere.” – The Guardian

“I remember a 14-year-old who was tied to one of the library’s columns. And he was tied up, with his legs above his head. Tied up. His whole body was blue because of the impact of the cables with which he had been beaten.” – The Guardian

“And while this interview was going on with a Saudi jihadi with Jim Steele also in the room, there were terrible screams, somebody shouting: ‘Allah, Allah, Allah!’ But it wasn’t kind of religious ecstasy or something like that, these were screams of pain and terror.” – The Guardian

Wars of conquest, theft and rape are never gentle. War is nothing but mass murder, torture and coercion motivated by the greed of the powerful. And the powerful have always put a veneer of “civilization” and “culture” over their atrocities. This reaches new heights of cynicism when the architect of military occupations, death squads, assassinations, state terror and torture centers is given a post as “professor” at a public university in New York City. This is part of the merging of capitalism, the state and education–all part of a system reproducing itself by stifling the possibility of new ways emerging.

Those brave enough to prick their pins in the inflated arrogance of these murders must be prepared for the absurd, howling reaction of the collaborationists: Brutalizing and criminalizing with the ultimate intent of silencing the voices and deadening the nerves that cry out.

How can we call a war criminal a teacher? With his poisonous gases and drones, Petraeus (with the help of men like Jim Steele, experienced in methods of US domination in El Salvador) terrorized civilians, while creating units of bloodthirsty killers to stoke a civil war in Iraq that wiped out tens of thousands of lives. Petraeus betrayed humanity to win battles, polishing these atrocities later in a self-aggrandized biography. A story of an American war hero, hero here being interchangeable with criminal, since in battle the sickest man can accomplish inhuman successes. All’s fair in love and war is a literary phrase, but one indicating the spirit that allows generals to build fortresses, impenetrable careers that depend on lies, distortion and hypocrisy, propped up by nationalistic aggression to act as salve for the psychological frailties of an always insecure state–A state which benefits from the atrocities it commits and feeds itself with justifications, eager to vanquish internal dissent like an inverted conscience.

When the ends justify the means we are left with subprime mortgages signed by hopefuls led to believe, wrongly, that the American dream could be theirs. The state-capitalism-education consortium supplies a steady mirage in the distance, a vision that, if it doesn’t eat you alive, will turn you to stone. Stop at nothing and you will be successful…. but stop at nothing and you lose your soul. Petraeus is a man who has no soul to lose: attempting to impose his inverted morality on youth, subliminally or otherwise. He is an imperialist leader in the battlefield, and his invitation to teach at CUNY transplants the force of an evil mastermind from the field to the front of the classroom. General Petraeus is famous for moral aberrations in the name of the state, organizing death in the name of freedom. If he is your teacher the new low is subterranean.

This is a man whose presence on campus can only be defended with violence. His prestige, just like his career, is based on violence. Employing Petraeus as a leader in an educational setting means death squads, white phosphorous, drone strikes on civilians and police brutality at a school near you.

POST SCRIPT: When we choose not to rebel, we make ourselves responsible for genocide. We are adults, capable of resisting, and our obedience means approval. Let us follow the example of those who have already stood against Petraeus, as together the students, staff and instructors at CUNY can easily expel this garbage from our midst. There cannot be business as usual at CUNY until Petraeus is hounded from here in shame! Let’s unite, take control of the university one classroom at a time, and deices for ourselves what studying here means! 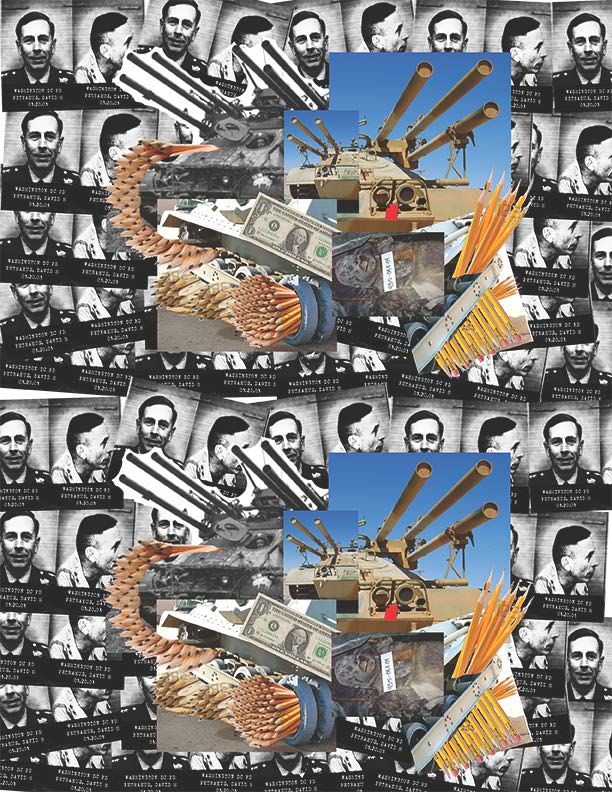